Milton Keynes: a small city with big plans that resides in the UK county of Buckinghamshire.

Earlier this year it was forecast that the population of Milton Keynes would grow 20% from 250,000 to around 300,000 in the next ten years. With that the council spotted a potential crisis.

This exponential growth will put immense pressure on the city’s infrastructure. Without further investment this could lead to poorer quality public services for those in Milton Keynes. This could give the city a bad reputation and hamper it’s long term growth plans.

To deal with this, Milton Keynes set out to become a British trailblazer, using an elaborate internet of things (IoT) network to alleviate some of the potential growth problems while making life easier for its residents.

Already Milton Keynes has rolled out remote sensor technology to all of its 80 recycling centres in an effort to reduce the wasted journeys of collection trucks. Previously trucks would often arrive at the centres to collect the waste, only to find the bin was empty. With the sensors installed the trucks now only come when the bins are full cutting down on wasted journeys.

Other initiatives to be connected through the IoT network include sensors to notify drivers of where there are free car parking spaces in the city and MotionMap, an app that continuously describes the real-time movements of people and vehicles across the city.

The council firmly believes that innovations such as these will ease the burden on public services, improve the quality of life for residents and reduce damage to the environment.

But these developments can’t happen without the right underlying connectivity. To support the MK Smart project a new 1Gbps network had to be invested in to ensure consistent data reliability. Whilst the IoT goes some way to alleviating the pressures put onto current infrastructure, investment is needed in other areas to make that shift possible. As more and more IoT-enabled devices hit the market and more smart city initiatives are rolled out further investment in fibre networks and connectivity is needed to truly realise the smart city dream.

This view is echoed by Aaron Partouche, Marketing & Business Development Director at Colt Technology Services who said “Supporting technological infrastructure within a city and its availability must be capable of managing the increased demand on network usage. Therefore, it is critical that cities ensure an effective rollout of fibre connectivity.” 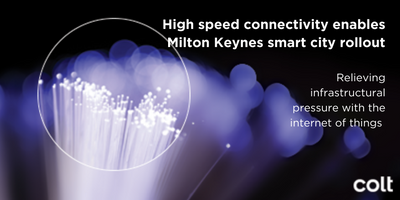