1,500 Delegates participated to The 2016 SDN & OpenFlow World Congress at the World Forum in The Hague (Netherlands) last fall. The four-day event started with a Workshop Day, featuring content from the Open Networking Foundation (ONF), the European Workshop on Software-Defined Networks, and the ETSI NGP Next Generation Protocol Forum.

The spokesperson did a presentation on “Enabling affordable high bandwidth in the WAN network with SD-WAN.” He explained that Colt is rolling out its software-defined wide area networking (SD-WAN) managed service to 13 countries across Europe, with more countries coming in 2017. Colt uses SD-WAN technology. For customer sites that are directly connected with Colt fiber, bandwidth already scales in a cost-efficient way.

Here’s a link to view the video of the participation of Peter Coppens, the Colt Head of Ethernet & IP Portfolio & Product Management at the 2016 SDN & OpenFlow World Congress during the World Forum in The Hague (Netherlands): https://youtu.be/h7QzX94uTEs 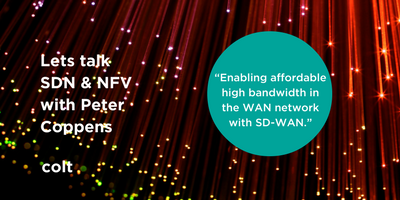 Colt is expanding its IQ Network footprint to Oracle’s dual-region Cloud to continue to serve the growing Cloud ...
Continue Reading →

Celebrating Pride Month: Why pride of place is important

Pride Month is celebrated in June each year to mark the anniversary of the Stonewall Riots, a pivotal ...
Continue Reading →

So you want to be an ally?