Software will further disrupt business in 2017

2016 was a year of great change for Colt, and I anticipate more disruption for businesses of all kinds in 2017 as the capabilities of cloud, software and the underlying network become further realised. Here are some things to look out for this year:

The rise of the bandwidth-hungry business

From 2017, technology firms like Colt will begin redefining their customer’s bandwidth appetite. Instead of defining businesses as ‘SME’ or ‘large enterprise’ based on the number of employees they have or their revenue, they will instead be defined by their bandwidth usage.

Bandwidth-hungry enterprises are at the forefront of digital transformation, they are enabled by the cloud and are often disruptors in their sector. International giants like AirBnB and Uber are completely dependent on the cloud, but then so are small firms at the leading edge of the technology sector, such as an augmented reality developer that is less than 20 employees strong but needs to move large amounts of video data to a render farm in another country several times a month.

Further disruption from consumerisation of business

Just as migration into the cloud by businesses of all types and sizes will accelerate exponentially, so too will the consumerisation of business. Society is getting used to wanting what it wants, when it wants and is often willing to pay a premium for convenience. However, these higher costs can be mitigated by sharing or renting rather than owning and in tandem with this there is a noticeable shift from conspicuous consumption to experience consumption. Take for example BMW’s DriveNow, a take on the Zipcar rental model, but marketed as a premium experience. The biggest change here is that people are choosing to buy a mobility solution, and one at different tiers, rather than invest in a car.

The cloud phenomenon came about as a result of enterprises moving away from infrastructure purchases to a rental and pay-as-you-go model. Now the same is becoming true of the network. In order to be a disruptor in any sector today, you have to be able to focus on adding value, and you can’t do that if you’re focusing on your network infrastructure. We focus on the network so you don’t have to. But importantly, we only focus on the network. It’s about specialism – do one thing and do it well.

As individual technologies like SDN (Software Defined Networking) and NFV (Network Functions Virtualisation) become more mature and familiar, network providers and enterprises will stop referring to them independently and start talking about ‘network intelligence’. For businesses today, many of which are in the throes of digital transformation, bandwidth is a critical requirement, an essential commodity, in the same category as power and water. In the information intensive economy, bandwidth must be delivered where it’s needed and when it’s needed on a high quality, constant and reliable infrastructure.

The network is the critical link to achieving a business’s key objectives, but international expansion, mergers, acquisitions, cloud adoption and wide-ranging integration all require network capacity that scales with the business. An intelligent network becomes an asset, with the capability to address mixed end-user and customer requirements, promoting on-demand distribution and consumption – to the right person at the right time, even anticipating future requirements.

We are now able to build intelligence in, around and through the network, creating a service that is ‘bandwidth requirement intelligent’ for the end user but is enabled by automated collective management for the operator. This is a resource which allows an organisation to dynamically provision, or self-provision, according to real time business requirements, which themselves are increasingly driven by user expectations and demands.

The rise of network federation

Although the internet is a “network of networks”, interconnection and interaction on a massive scale have been held up by technological obstacles, preventing networks talking to each other. Network-to-network interaction is now possible, we’ve done it, and this is going to be a total game changer in terms of what it means for information distribution on a massive scale. In fact, the full implications are not even clear yet, but we’re talking about end users being able to provision connections and capacity on networks in other countries, on infrastructure run by different providers, in real time and from one portal. Technologically this is a new era, but economically and commercially it’s even bigger than that. 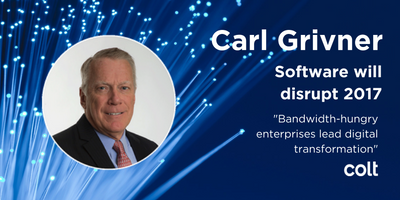