Major investment to deliver digital transformation to fast-growing sectors across Asia, including finance, manufacturing and Internet of Things

Singapore, Hong Kong and Tokyo, 12 January 2017 – Colt, the global high bandwidth network provider, announced today it will expand and enhance the Colt IQ Network™ in Singapore and Hong Kong in 2017 as part of its plans to invest significantly into Asia over the next three years. In Singapore, these investments will revolve around a series of initiatives that include a large-scale expansion of existing coverage, provisioning of high-bandwidth capacity, and new digging projects for Colt’s next-generation fibre.

With this expansion, Colt is challenging the market status quo and is the only provider which will have fully-owned fibre metro networks in key Asian cities (including Tokyo, Osaka and Singapore) and major European cities. Colt’s Singapore-based initiatives are set to begin in April, with Hong Kong and other Asian cities to follow in 2017 and beyond. This continues a pattern of heightened activity in Asia from Colt in recent months. The company launched the Colt IP Access Service, expanded etherXEN for AWS connectivity1, and introduced Colt E-LAN Services for the Singaporean market in the second half of 2016.

Colt will also augment these investments by adding key submarine cable routes to its backbone and increasing core resiliency, further boosting the reliability of its intelligent network. It will also support the specific requirements of key sectors like capital markets, manufacturing, and the growing bandwidth requirements linked to the Internet of Things and smart cities.

Further to supplying high-bandwidth metro connectivity, Colt will link businesses in Singapore and Hong Kong directly to hundreds of international cities, including Busan, Tokyo, Sydney, Chicago, New York, London, Frankfurt and Paris via its own intelligent global network. The Colt IQ Network is a 100Gbps optimised network distributed to 200+ data centres and carrier hotels around the world providing best in class service and optimised for SDN, NFV and cloud services.

“Last year, Colt demonstrated its commitment to delivering high-bandwidth digital transformation to businesses in Asia that are global yet need local attention, through initiatives including the construction of the Japan National Network2,” said Kenji Hioki, CCO Asia at Colt Technology Services. “Today, we continue to build on that investment with our Singapore and Hong Kong expansions, which are designed to deliver the advantages of speed, security, and reliability to businesses looking to connect to markets in Asia and beyond.”

Colt will be demonstrating its high bandwidth solutions at PTC’17 in the company’s meeting room at Hilton Hawaiian Village, Tapa Tower, Room #1530 in Honolulu, Hawaii, 15-18 January 2017.

Colt provides high bandwidth services for enterprises and wholesale customers in Europe, Asia and North America’s largest business hubs. Colt enables the digital transformation of businesses through its intelligent, purpose-built, cloud-integrated network, known as the Colt IQ Network. It connects over 700 data centres around the globe, with over 24,500 on-net buildings and growing. Colt is also recognised as an innovator and pioneer in software defined networks (SDN) and network function virtualisation (NFV).

Colt has built its reputation on putting its customers first, with a focus on delivering true local presence and agility for enterprises that are global yet need local attention. Customers include data intensive organisations spanning over 200 connected cities in nearly 30 countries. Colt counts 19 of the top 25 global telecoms companies and 18 out of the top 25 global media companies (Forbes 2000 list, 2016) amongst its customers. In addition, Colt works with over 50 exchange venues and 13 European central banks. Owned by Fidelity Investments, Colt is one of the most financially sound companies in its industry, providing the best customer experience at a competitive price. For more information, please visit www.colt.net. 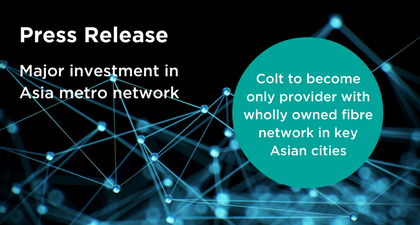