Back to:
Connect to the cloud

Discover more:
Get a quote
Chat to us
Arrange a demo

Where customers require 1Gbps circuit bandwidths or multiple BGP peerings, it is recommended that the dedicated port option is considered.

Each AWS Direct Connect PoP is linked to a parent region (e.g. EU Dublin) – but customers can establish inter region connectivity via AWS’s Direct Connect Gateway feature. For example, a hosted port in Dublin can now be used to connect to the EU Frankfurt region.

AWS support bandwidths between 50Mbps and 500Mbps on hosted ports. Hosted ports are handed over on a shared NNI and are available immediately after the incoming connection is accepted in the AWS console, after which the On Demand cloud port request is completed.

(Note – Hosted Ports are formally called Hosted Connections by AWS, the term “port” is used in the On Demand platform to avoid confusion with circuit connections)

Connections to AWS hosted ports are based on a 1:1 circuit connection to hosted port mapping. The cloud B end configuration is always based on single 802.1Q VLAN* – this is automatically configured when the default “Cloud VLAN” option is selected. * The Ethertype is 8100, although this is not visible to customers

The standard VLAN modes apply at the customer A end port, which are summarised in the below table:

The below diagram summarises the configuration. 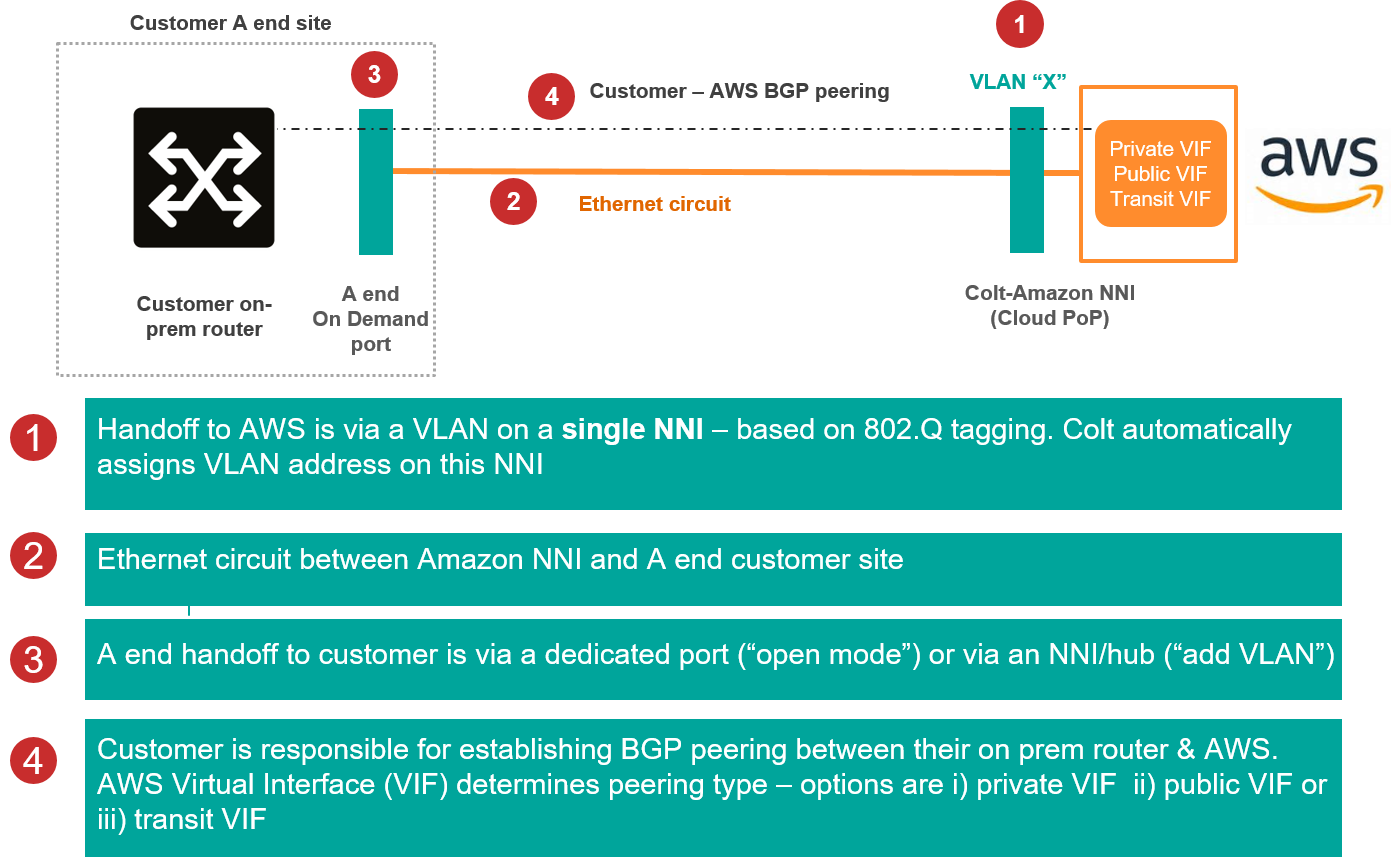 The customer journey to establish end to end connectivity to an AWS hosted port is illustrated below:

Customers will need to first request a dedicated port via the AWS subscription, taking care to select the correct AWS region and Direct Connect PoP. A Letter of Authority (LOA) is then generated within the AWS console which should be uploaded to the On Demand portal using the button provided.

*IMPORTANT – it is important that the customer selects the correct AWS region and Direct Connect PoP location within the AWS Console.*

Similar to hosted ports, each AWS Direct Connect PoP are linked to a primary region – but customers can now access multiple regions via AWS’s the Direct Connect Gateway feature.

Currently, only 1Gbps ports are supported on the On Demand platform.

Amazon only support 802.1Q VLANs, which means that customers are restricted to the C-VLAN option (i.e. an 8100 Ethertype) at the AWS end of the circuit Connection. AWS do not support QinQ VLAN tagging.

The standard port VLAN modes apply at the customer A end site.

Under the dedicated port model, Amazon do not impose any bandwidth on VLANs – they are dynamically scaled.

The following VLAN modes apply at the AWS B end (i.e. dedicated port end), summarised in the below table:

The below diagram summarises the configuration: 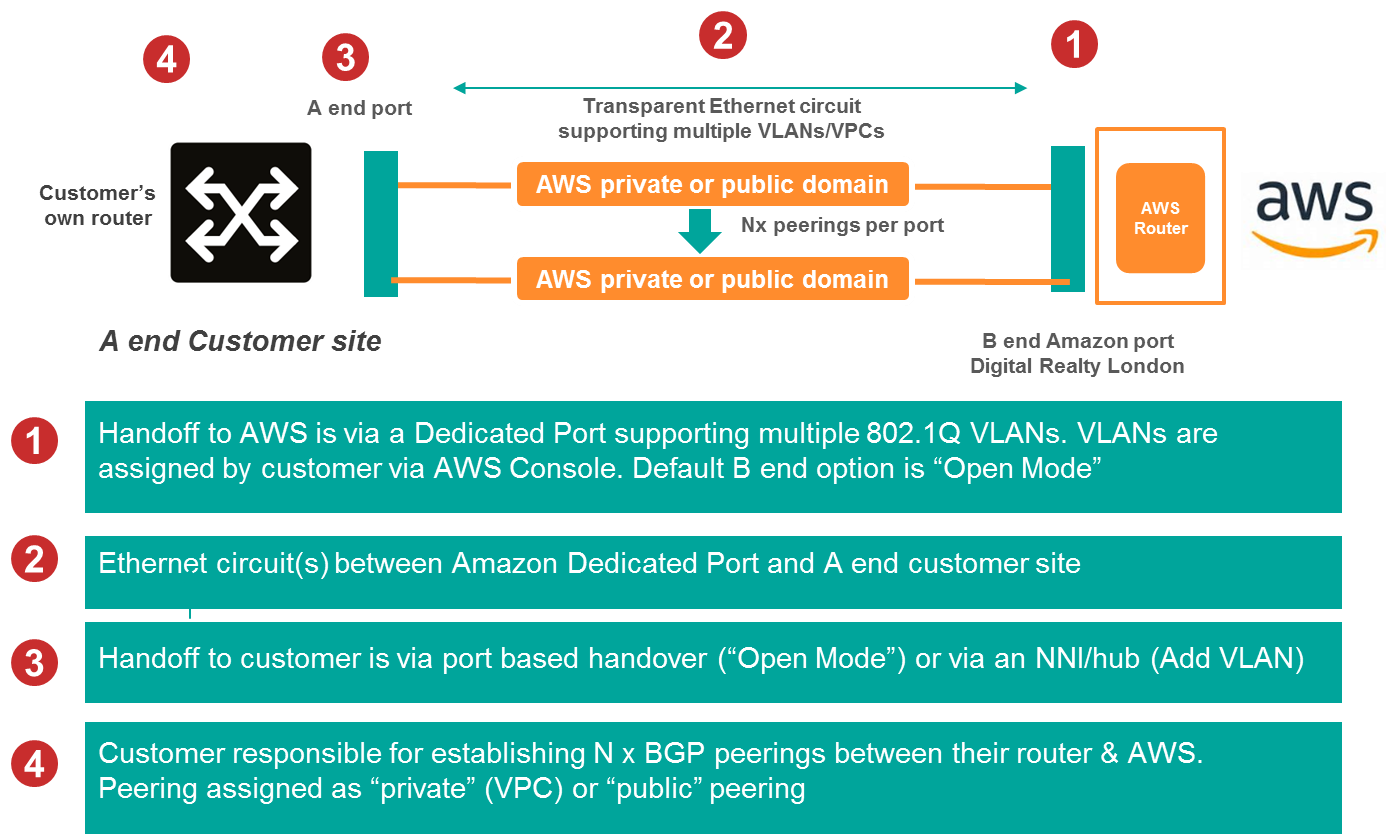 The customer journey to establish end to end connectivity to an AWS dedicated port is illustrated below. Note that the LOA must be requested for the correct AWS Region and AWS Direct Connect PoP associated with that region.

Amazon dedicated ports in asia pacific (and other locations)

Under this option, customers are required to attach the AWS LOA to the cross connect order when requested.

Back: Connect to the cloud
Next: Dedicated Cloud Access for AWS